Old Cantabrigians in World War One

On Remembrance Day, the College remembers the lives of students and staff who fought in World War One A wreath of poppies hangs below the Roll of Honour
You may not know this but the College is just over a hundred years old, and was founded in 1900 as a so-called High School. The move to our current site took place in 1903 when there were 205 students; that number had probably doubled by 1914. In that year the country went to war in what was going to be called the First World War and immediately Old Boys from the High School began volunteering for Kitchener’s New Army. Many of them never came home. 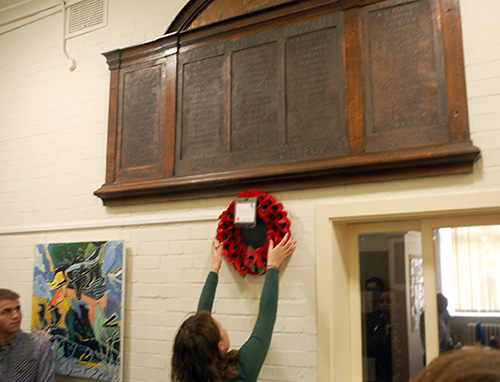 In 1924 our First World War memorial was dedicated; a Roll of Honour which can still be seen in the corridor near the Bursary. It records the names of all those who were killed, some 89 students and 3 members of staff. The great majority served in the Army and were killed on the Western Front, but some served in the Royal Flying Corps and Royal Navy and took part in conflicts all over the world. One of them, John Burgon from Haverhill, was only 16 years old; six were 17 and two were 18. The oldest was a mere 36 years old.
This morning a wreath of poppies was hung below the Roll of Honour to remember these brave students and members of staff.

For more information, including details on the lives of four students who fought and died in the war, please click here to view a presentation prepared by Dr Chris Welander. Ted Coney was Head of Art & Design at Hills Road Sixth Form College for over 30 years, and has since opened his own pop-up art gallery in Ely More...