The Hills Road Ultimate Team 2015-2016
Recently, two of our current Hills Road students, Nat Brown and Poppy Gurney, were selected to represent the GB U20 Women at this year's World Junior Ultimate Championships that are being held in Wroclaw, Poland 31st July - 6th August 2016; a huge congratulations once again! You can view a full list of the team here: http://www.ukultimate.com/national_teams/gb_juniors/gb_junior_women_u20

The girls first got involved in the sport through the Hills Road Ultimate Club that is run by Alumnus Tristan Colaco. We were able to catch up with him and find out more about the club, his Ultimate career and what he's been getting up to since leaving Hills Road in 2013.


1. What was your fondest memory of Hills Road?
I think my fondest memories probably come from my Double Maths class. It was a small class, and we all got on really well.

2. Since leaving Hills Road, what have you gone on to do?
I went straight to university to study Natural Sciences at Homerton College, Cambridge (so I didn't go very far!) and am now in my final year, specialising in Zoology. In terms of my Ultimate career, I have played for the University team (Strange Blue) at a couple of regional and national competitions and also played for the Cambridge town team (Cambridge Ultimate- CUlt).

3. How did you find out about Ultimate Frisbee and when did you first try it?
I had played a tiny bit in secondary school, but only seriously found out about Ultimate in the summer after Lower Sixth (2012) through a friend from secondary school (who was at Long Road). He was introduced to the sport just by seeing CUlt training on Jesus Green and going up and asking the people playing about the sport. They are a really friendly bunch, and got him joining in. He told me and some other friends from Hills Road about it, so we decided to go along, and got hooked. CUlt training is run by some really high level Ultimate players (there are a fair few full GB players and GB under 23 players involved in the club) so the standard of coaching is really good, but it is completely free and open to all; everyone at the club loves the sport so much, so they are really keen to get new people picking up a disc  here is the website of the team with details of when and where practices are https://cambridgeultimate.wordpress.com/get-involved/

4. Could you tell us a little bit more about the sport and what is involved?
The World Flying Disc Federation gives a great, concise summary here www.wfdf.org/sports/ultimate. The game is played by 2 teams of 7 (though there are indoor/beach versions played 5v5) on a pitch that looks somewhat like an American football pitch, in that it has 2 "end zones" at either end of the pitch.

Essentially the aim of the game is to pass the disc up the field without dropping it and ultimately (no pun intended?) catch it in the opposition’s end zone. The opposing team will attempt to intercept and block passes, and if a pass does not complete, possession turns over to the opposition who can immediately try to score themselves. You are not allowed to run when you have the disc in your hands, so the only way to progress up the pitch is by throwing the disc to a teammate.

Perhaps the most unique aspect of the sport is that it is self-refereed (i.e. the players on the pitch make calls about infringement themselves) even at the highest level. This means that the sport relies upon "Spirit of the Game"- this is pretty much like sportsmanship. Players are expected to play as competitively as they can, but at the same time have respect for other players and play by the rules of the sport.

Perhaps another unique selling point of Ultimate is that is played mixed to the highest (international) level, although there are also women's and men's divisions. The Hills Road team is mixed.

5. What inspired you to set up a club at Hills Road?
I have to admit that I didn't really set up the club. Most of the hard work was done by a fellow student. Really it was just a group of us who essentially wanted somewhere we could train regularly, and the college was willing to let us use the sports centre on a Friday afternoon - nothing particularly noble! But once we had the regular training spot directly after school, we realised that we had the opportunity to introduce the sport to other members of the college, so we got in touch with the Sport department (Ann Hemming specifically) and they sent an email out to the whole College, which resulted in a few new people turning up to train. After we left College, I was still around (being at University in Cambridge) and some of the others who started up the team were on gap years, so there were still people around to help keep the team going.

This year we became an official Enrichment session and got lots of interest from Year 12 students, which was really great. I guess in the end it would be great to become as integral to the College as other sports like rugby and football to properly secure the future of the team.

6. What would you say has been the biggest success for the club so far?
It is quite hard to pin down a single standout success! The recent success of two of our girls getting into the GB U20 squad is obviously a huge achievement; I am so proud of both of them, especially seeing as they have both been playing the sport for less than 6 months!

But even before this most recent big news, the team has been quite successful. In 2013 a Cambridge Ultimate junior team (composed mostly of students from the College team with additions from Long Road and The Perse) went to Junior Nationals in Birmingham and came 5th, which was a massive achievement given that at that time most of us had been playing less than a year. Past members of the team have also gone on to have great success in university teams, with the majority of past members playing for their university at national level and two past members going on to captain their university teams. Hills Road Alumni have also had success playing for other clubs since leaving, going on to play at national and European competitions. 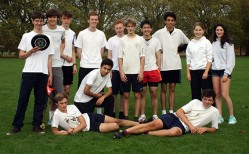 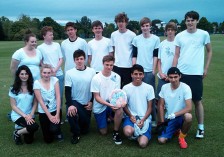 Thank you Tristan for sharing your passion for the sport! Have you ever tried Ultimate? Comment below and share your Ultimate experience