Alumnus, Beau Bridgland, has big plans for his big voice. Beau enjoying the sun in Hollywood
Alumnus, Beau Bridgland, has big plans for his big voice. With plans of progressing his voice acting career further, Beau has been saving up for his big move over to LA. We caught up with Beau to find out about his achievements since leaving the College and what it's like to be a professional voice actor.

1. What was your fondest memory of Hills Road and how did you become interested in voice acting?

In my life I've had three epiphanies about voice-over. The first one, when I was 12, long-story short was when I realised what voice-over (VO) actually was and thought, "That would be a cool job". However, at that point it wasn’t THE thing I wanted to do.

That leads into my second epiphany on the bus heading to Hills Road one day. This also happens to be one of my fondest memories from my time at College. I was sitting with my friend Finn and telling him all about a funny TV show I had watched the previous night. I was trying to do all of the voices to recreate the show and its humour as fully as possible. He was really laughing and when he stopped, he turned and said, "You know, you're really good at that. Have you ever thought about doing it professionally?" That's when it hit me, maybe if I did the homework and put in the effort, why couldn't I do it professionally? In the past I’d thought it would be an awesome job but it was only at that moment when I truly considered it. I realised it could be attainable, and it became the only thing I wanted to do with my life. Every second of my life since that day, 8 years ago, has been different.


2. When you were at Hills Road, what did you want to do in life – is this still the same?

I originally thought I would maybe become a Maths teacher as I was always an academic kid and it just seemed like a natural progression and a "sensible" choice. However, VO was and still is the only thing that fully makes sense to me as a career. It was actually something I WANTED to do and not merely "Oh I could do that". I feel lucky to have had that realisation. When you're an academic kid from Soham, you just don't think about going to Hollywood to be in cartoons and stuff, you know? 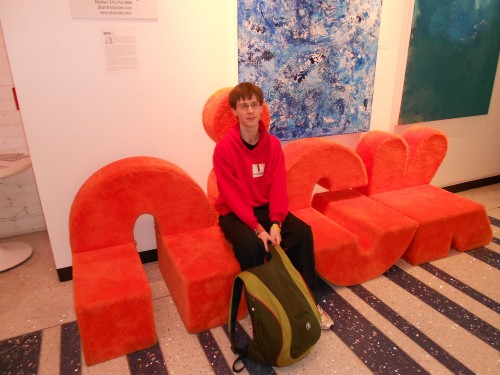 Beau on one of the iconic orange sofas at Nickelodeon Studios

3. What made you decide to take up voice acting, did you have to undertake any special training?

My epiphany in 2008 is how it started. But it was whilst I was at Loughborough University studying Maths that I learnt about VO in my spare time from books the Internet, watching videos and asking voice actors questions via email and Facebook.

After University I received a newsletter advertising the VOICE convention (Voice Over International Creative Experience) - it was the perfect next step for me. I went to that in June 2012 to learn, network and soak up as much as I could. It was an incredible experience and I got to meet so many wonderful people from all over the VO spectrum, including a number of my childhood heroes.

I started to take online workshops and had private coaching from American, LA-based coaches via Skype before going on a trip in late 2013 to Los Angeles to explore the VO world first hand. I met even more people and took more classes whilst also meeting up with my previous coaches. I had the best time of my life.

One particular highlight was my visit to Nickelodeon Animation Studio where I watched animation sessions being recorded for Blaze and The Monsters Machines and one of my absolute favourites, Teenage Mutant Ninja Turtles.

I returned to LA again a year later where I recorded my demos, which you can listen to on my website - http://www.beaubridgland.net/


4. What is it like to be a voice actor and what has been your favourite project to work on?

I love being a voice actor. It's a perfect fit for me and makes me incredibly happy. If you can find something that you're passionate about, that you think about all the time, and get to do it for a living, it's a wonderful way to live your life.

My ‘favourite project’ is a tough one because there are many factors that make a job enjoyable. I particularly enjoyed creating an audition recording for a specific project. The company then asked for the audition to be used as the final version because they liked it so much - so I had fun and had no extra work to do!

The video game Surface: Return to Another World was also really enjoyable to work on. I am definitely pulled more towards character-based voice acting. Narration is a lot of fun but characters and dialogue are a blast!

Despite this, it was my animation demo that was the most fun thing I've done. That was a spectacular day, I had more fun than ever performing and it was my third epiphany, one where I felt assured of everything. I felt like I had what it takes to be in this business. I realised just how much I love it and need it and knew for sure that I was on the right path. Everything I thought about VO and my future in it was 100% correct. 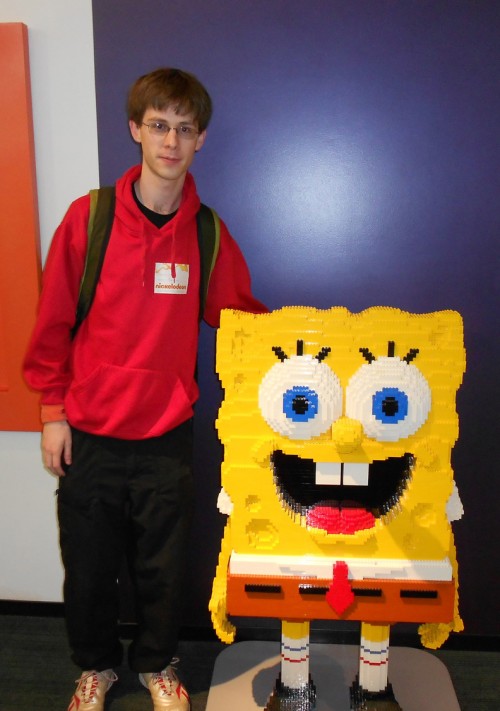 Beau with the famous SpongeBob Square Pants at Nickelodeon Studios

5. How have you been raising the money for moving to LA?

Primarily the money has been raised with voice acting. But in addition to that, I have been copying peoples' camcorder tapes and video tapes onto a digital format for them. Nowadays you can have your old Christmases and other family footage from the 90s on a USB stick that plugs right into your TV or computer - it's amazing!

I also have my eBook: "Day-To-Day Happiness: A simple and effective guide to happier thinking, happier language and a happier you", which is a way for me to help people whilst they help me back. I had very deep depression, severe anxiety and rock-bottom self-esteem, which started during my second year of university and continued for over two years. Six months after university when I still felt awful day-in, day-out, I knew I needed to do more. I had medication for a few months, had some cognitive behavioural therapy and read a brilliant book called "Feeling Good: The New Mood Therapy" and after that, I felt like myself again for the first time in over two years. That's when I had the email about the convention and it was a few days after I first thought “I kind of feel normal again now; I feel like my old self again, so now what?" The book covers what took me from that terrible place to being able to go on all of my wonderful American adventures. More details about the book can be found here:
http://www.beaubridgland.net/ebook/


6. What is the story behind the photograph of you and Neil Flynn, have you met any other famous actors or people?

Neil Flynn is an old friend of one of coaches, Bill Holmes. They've been friends for decades and I was very kindly invited along by Bill to one of their catch-ups. Neil was a really great guy and I very much enjoyed chatting to him. I love Scrubs and his character, the Janitor, so getting to meet him was really great. I've met a number of really awesome people. Not many voice actors are famous but their roles certainly are.

Neil Flynn is probably one of the most famous and recognisable people I have met, but there are many other famous actors and voice actors I have met over the years, all of which have been an absolute pleasure to meet. 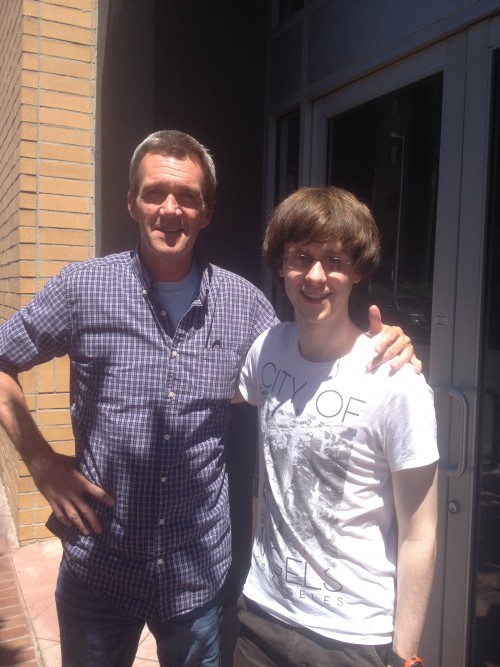 Beau with Neil Flynn after their lunch with Beau's coach, Bill Holmes

Did you have an epiphany moment whilst at Hills Road, helping you realise what you wanted to do with your career once leaving? If so we would love to know, please get in touch and email alumni@hillsroad.ac.uk