The team were delighted with their win in the J18 eights after having previously completed a tough 2km course on the river.

The crew, although a new combination, worked positively together and set off at a good pace after the first 500 metres. Katie Hill and Molly Tooher-Rudd were able to gain time by carefully navigating the corners and maximising the speed at the straights.

In the second leg the girls were slower due to starting against the stream and their tiredness growing after their impressive first leg. However, they soon settled back into pace and finished strongly.

Their overall time was 17minutes and 54 seconds which was just enough to gain them a well-deserved first place!

The boy’s team were also triumphant as they won their 4th even of the Head race season.

Coach, Andy Johnson said “It's a good challenge two Olympic distances with no real rest in between.

“I was particularly pleased with the second half as the boys showed a lot of spirit to push away from a men's college crew behind them.

“This bodes well for the National Schools Head race on the Thames in March.”

Overall, it was a cause for celebration all round as Hills Road saw many victories on the day due to the self-motivation and passion that all the teams displayed.

You can hear more updates and news on Sport and Leisure by liking the Hills Road Sixth Form Sport's Facebook Page: https://www.facebook.com/hillsroadsport/ 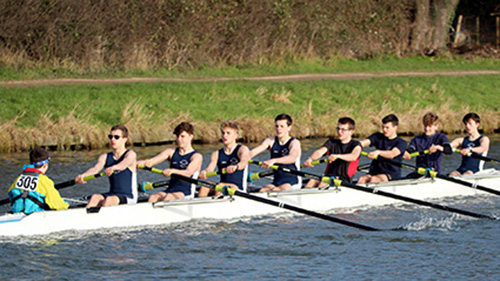 Read about Jonny Littlewood who talks about his gap year, university and his time at Hills Road More...