At Hills Road, all students are offered the opportunity to get involved in rowing as part of their enrichment programme. The 'learn to row' course, supported by Sportivate funding, encourages beginner rowers to participate in the sport. Many students, who take part, then move onto rowing competitively for the College.

The girls won this prestigious award for their performance competing in the Cambridge Town Bumps, an annual series of boat races held on the River Cam this year from 21st to 24th July. The Hills Road girl’s crew won blades by bumping up at every opportunity, securing a place for the Cantabs 6 crew in the second division.

Holly Hill, Cambridge University and Great Britain rower who won the bronze medal in the women's four crew at the World Under-23 Rowing Championships in August, presented the blade to the girls at The Hills Road Sports and Tennis Centre where it will be displayed.

Ann Hemming, Head of Sport at Hills Road said: “This is a tremendous achievement with the crew successfully bumping up five places across the week.”

“However, I think equally impressive is the large numbers of Hills Road rowers involved in the bumps at all levels, a reflection of the hard work, support and enthusiasm of the Cantabs coaches.”

“The Cantabs/Hills Road partnership grows each year and is proving particularly popular with female students.”

“Hills Road crews not only achieved success in the bumps but have proved worthy opposition against some of the top public schools in the country at the Schools Head on the River Thames.”

Linda Sinclair, Hills Road Principal said, “This success is the outcome of exceptional hard work and commitment on the part of both students and coaches who all deserve our warmest congratulations.  I am delighted to see our partnership with the Cantabrigian Rowing Club going from strength to strength.”

The Cantabrigian Rowing Club welcomes those who enjoy purely recreational rowing for fitness and social benefits, through to those who compete in regional, national and international events. The club is one of the most successful in Cambridge and is affiliated to British Rowing and the Cambridgeshire Rowing Association. 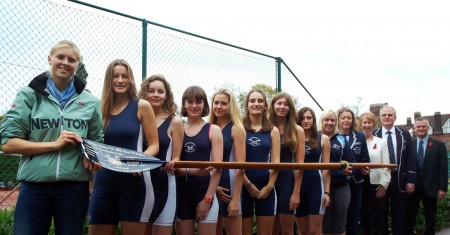 An update on how the new building at Hills Road is progressing. More...